Many movies have been made about the tragic story of the Titanic. Arrogance and ignorance was definitely present during its maiden voyage, which was Titanic’s last voyage.

Many warnings were given, but unfortunately, the warnings were not taken seriously. On April 14th, 1912 Titanic received six warnings that icebergs were present in their perimeter. On the night of April 14th, Titanic struck an iceberg and ultimately sank to the bottom of the Atlantic Ocean.

For other entities, what happened to the Titanic does NOT have to happen to them. Many have learned from the mistakes that Titanic had made.

There are several examples that follow and form a parallel to what happened to Titanic and how an entity can learn from Titanic’s mistakes.

1. The Titanic only had 16 lifeboats, which was not nearly enough to save everyone on the ship. 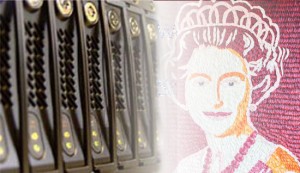 When I was working at a Helpdesk, one of our afternoon gals was named the “Backup Queen” because she took EVERY major server backup VERY seriously. The company was very lucky to have the “Backup Queen” because there were several instances where our most critical server had crashed and lost information. Fortunately, information restoration was quick and painless due to the machine being backed up on a regular basis.

We were very lucky to have someone who took the initiative to handle the server backups. Is your company that lucky? Yes, doing backups can be VERY unexciting. However, losing valuable data can be very exciting, but in a negative way.

2. The crewmen in the lookout tower, or the “crow’s nest,” were not issued binoculars to better search for icebergs.

Employees were not given the proper tools to use to do their job. Is your company using the right software for the job? Are you saving money on upgrading your operating system and software, but are losing customers? If you are losing customers, you’re NOT really saving any money at all.

The right equipment can range from the very basic, such as issuing headphones that are compatible with the phone system to customer service representatives, to ensuring that a backup generator can adequately run due to a power outage.

Does your company have a good disaster recovery plan in place? If a flood or a fire struck the premises, would you be able to resume business operations in a matter of days or would it take a matter of months?

Is your information that you have on site being sent off site so you CAN have another place to access your valuable information?

4. The Titanic was going at full speed at night in iceberg-infested waters.

Are your machines at your business running at 100% capacity on a continuous basis? How much is downtime costing you when those machines need to be fixed? Are you REALLY saving money by not buying more machinery? Does the cost of more machinery outweigh the cost of your present machines’ downtime?

5. The Titanic did not heed to the many iceberg warnings.

Titanic received six iceberg warnings on the day it sank! Is your sales force, customer service department and/or helpdesk REALLY listening to your customers? Sam Walton, the founder of Wal Mart, said that the most important person to an organization can be the one who greets that customers. Too many companies don’t even realize just how MUCH each person represents their company!

There is WAY too much competition in the marketplace NOT to heed warnings. Industries like telecom, automobile, office supplies, soft drinks, and restaurant industries, just to name a few, had better take warnings seriously. Some companies might not get the luxury of six warnings that the Titanic got. Sometimes, only one warning can break a company. That’s why companies that DO encourage, and take seriously, customer feedback are invaluable and can be a gold mine.

6. The Titanic only had white flare guns to signal for help.

Red is the standard color for a flare gun used to signal for help. When the Titanic was sinking, white flare guns were shot off from the ship. One or two ships many miles away say the white flares, but did not interpret the white flares as warning messages.

Does your entity use the proper means of communication? Is it ensured that all of the parties involved completely understand what the other parties are saying? Many groups within an organization speak entirely different languages. Sales, technology and management translations may as similar to translating three different foreign languages.

Ismay wanted the Titanic to arrive in New York on Tuesday, April 16th. In order to meet this goal, the ship would have to travel at full speed a majority of the time. The coercion from Ismay turned out to be dangerous due to the ship’s demise.

Ismay’s level was similar to a CEO’s level. Is your company’s CEO and the rest of the management staff setting realistic goals? Are your managers providing bilateral communication? Feedback is vital to any company’s survival because many managers are not involved in day-to-day activities.

8. The two wireless operators’ priorities were not focused on the ship’s priorities.

Many of the aristocrats in first class passage had paid both operators bonuses to wire messages to New York. One of the Titanic’s operators told another ship to “shut up” after being given another iceberg warning. It was a powerful rebuke that may have cost thousands of lives.

9. The Titanic’s steel construction was never tested in cold temperature.

The steel that made up ocean liners in the early 20th Century was brittle to begin with. Unfortunately, the steel was never stress-tested to determine what stress levels the structure could endure.

Is adequate testing being done on your company’s products? Are your prototypes up to the challenges of customers’ demands? Are an automobile company’s crash tests being utilized to the fullest extent?